The vz 58 is a 7.62mm assault rifle designed and manufactured in Czechoslovakia and accepted into service in the late 1950s as the 7,62 mm samopal vzor 58 ("7.62mm submachine gun model 1958"), replacing the vz. 52 self-loading rifle and the 7.62×25mm Tokarev vz. 24 and vz. 26 submachine guns. The vz. 58 externally resembles the Soviet AK-47 but is internally a substantially different design based on a short-stroke gas piston, which shares no parts with the Kalashnikov design.

Development of the weapon began in 1956; leading the project was chief engineer Jiří Čermák assigned to the Konstrukta Brno facility in the city of Brno. The Soviet Union had begun insisting that the Warsaw Pact forces standardize on a common ammunition. As a result, the prototype, known as the "Koště" ("broom"), was designed to chamber the intermediate Soviet 7.62×39mm M43 cartridge, rather than the Czech 7.62×45mm vz. 52 round, used in both the earlier vz. 52 rifle and the vz. 52 light machine gun.[3] The assault rifle entered service in 1958 and over a period of 25 years (until 1984), over 1 190,000 weapons had been produced, fielded by the armed forces of Czechoslovakia, Cuba and several other Asian and African nations.

The vz. 58 was produced in three main variants: the standard vz. 58 P (Pěchotní or "infantry") model with a fixed buttstock made of a synthetic material (wood impregnated plastic, older versions used a wooden stock), the vz. 58 V (Výsadkový—"airborne"), featuring a side-folding metal shoulder stock, folded to the right side, and the vz. 58 Pi (Pěchotní s infračerveným zaměřovačem—"infantry with infrared sight"), which is similar to the vz. 58 P but includes a receiver-mounted dovetail bracket (installed on the left side of the receiver) used to attach an NSP2 night sight; it also has a detachable folding bipod and an enlarged conical flash suppressor.

A successor to the vz. 58 was proposed in the 1990s; the 5.56×45mm NATO ČZ 2000 assault rifle has been suggested as a possible replacement but due to a general lack of defense funds within the Czech Republic, the program was postponed. Another recent contender is the ČZW-556 assault rifle and ČZW-762 light machine gun which both use lever-delayed blowback which has more reliable accuracy and performance over the gas operation.

The vz. 58 is a selective fire gas-operated weapon that bleeds expanding combustion gases generated in the barrel from the ignited cartridge through a port drilled in the barrel, 215 mm (8.5 in) from the chamber, opening into a hollow cylinder located above the barrel that contains a short-stroke piston. The vz. 58 does not have a gas regulator and the full force of the gas pressure is exerted on the piston head, propelling it backwards in a single impulsive blow. The piston is driven back only 19 mm (0.7 in) when a shoulder on the piston rod butts against the seating and no further movement is possible. There is a light return spring held between the piston shoulder and the seating which returns the piston to its forward position. The gas cylinder is vented after the piston has traveled back 16 mm (0.6 in) and the remaining gases are exhausted into the atmosphere on the underside of the cylinder via two ports. The entire piston rod is chromium-plated to prevent fouling.

The locking system features a falling breech lock hinged from the bolt and housed in the bolt carrier that contains two locking lugs which descend into and engage locking shoulders in the receiver's internal guide rails. The weapon is unlocked by the short tappet-like stroke of the piston rod as it strikes the bolt carrier and drives it rearwards. After 22 mm (0.9 in) of unrestricted travel, a wedge-like surface on the bolt carrier moves under the breech locking piece and lifts it up and out of engagement with the locking recesses in the steel body. The breech locking piece swings up and this movement provides the leverage required for primary extraction. The breech block is then carried rearwards extracting the empty cartridge casing from the chamber. A fixed ejector passes through a groove cut in the underside of the bolt and the case is flung upwards clear of the gun.

The spring-loaded extractor and firing pin are both housed inside the breech lock, while the fixed ejector is located at the base of the receiver.

The weapon does not have a conventional rotating hammer but is striker-fired and the striker is a steel bar hollowed from one end almost throughout its entire length to accommodate its own operating spring. At the open end of the striker, a plate is welded and there is a groove cut in each side of this to slide on the receiver guide rails. This hammer-striker enters the hollow bolt and drives a fully floating firing pin forward with each shot.
The rifle uses a trigger mechanism with a lever-type fire mode selector, which is also a manual safety against accidental discharge. When the selector lever is placed in its rear position ("1"—single fire) the sear is disabled and the left striker catch is rotated by the disconnector, which is depressed by the bolt carrier after every shot and is therefore disconnected from the striker catch. The forward setting of the selector lever ("30"—automatic fire) disables the disconnector, and the left striker catch meshes with the sear mechanism. The center ("safe") setting with the selector lever pointing vertically downwards, mechanically lowers the trigger bar and the disconnector so there is no connection between the trigger and the semi-automatic sear which holds the hammer. The rifle also has an internal safety, which prevents the weapon from discharging when out of battery. The right striker-hammer catch disables the striker-hammer, and it can only be released by pulling the charging handle back and cocking the weapon.

The weapon is fed from a detachable box magazine with a 30-round cartridge capacity and made from a lightweight alloy. When the last round from the magazine is fired, the bolt will remain locked open on the bolt catch, activated by the magazine's follower. The magazine release tab is located at the base of the receiver on the left side, behind the magazine well. The bolt carrier has a built-in guide rail used for reloading from 10-round stripper clips (from the SKS rifle). Despite their similarity, vz. 58 magazines are not interchangeable with those of the AK-47 and its derivatives.

An interesting feature on this rifle is the ability to quickly change the type of stock it has. The vz. 58 can appear with either a fixed wooden stock or a side-folding metal stock. Switching between the two requires merely removal of a pin at the rear of the receiver and swapping in the stock of choice.
The rifle's iron sights consist of a fully adjustable front post and a tangent rear sight with a sliding notch with range denominations from 100 to 800 m, graduated every 100 m. Besides this, the left side of the rear sight leaf is marked with the letter "U" (univerzální meaning "universal"), for snap shooting, firing at moving targets and night combat at ranges up to 300 m. The rifle's sight radius is 15 inches (38 cm). The front sight base also serves as a mounting platform for the vz. 58 edged bayonet. 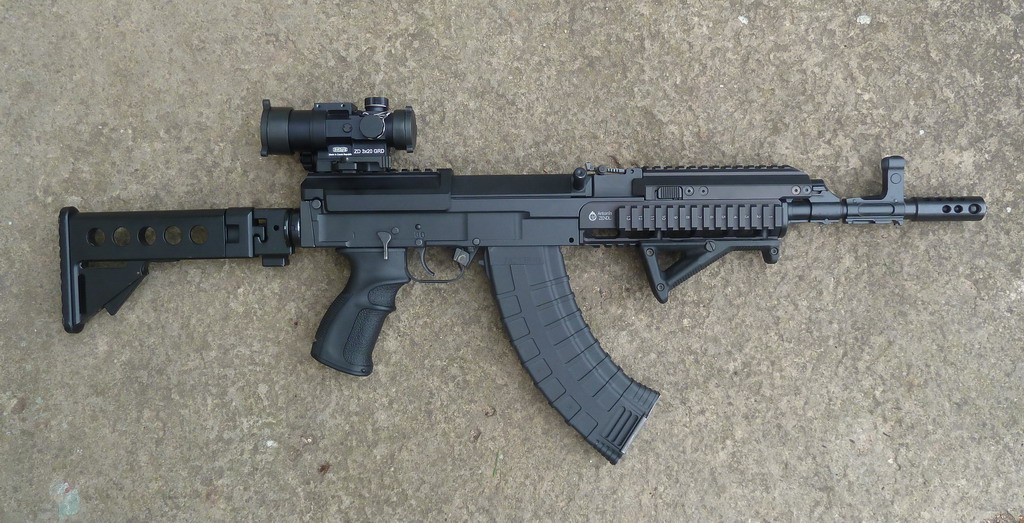